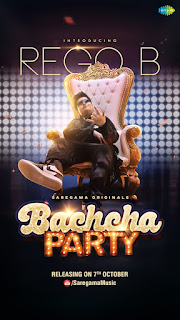 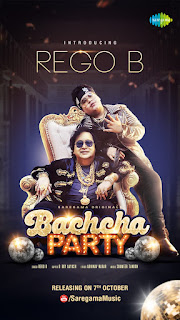 Mumbai : Saregama – India’s oldest and largest music label has launched the latest kids’ party song Bachcha Party featuring global superstar R.E.G.O.B The song has now crossed 1 million views in  just 4 days. R.E.G.O.B - singer, who also features in the music video has received overwhelming response from  the audience. The song is poised to be a kids favorite in parties.

R.E.G.O.B was selected to sing and feature in this song following a very tedious process of multiple rounds of auditions. Shameer Tondon, the composer of Bachcha Party, is entitled to receive the credit for finding this child wonder through a large bunch of kids recommended by a reputed music school in Mumbai.

“The stupefying fact about this song is, we did not know until at the end of the auditioning process that R.E.G.O.B is the grandson the legendary Bappi Lahiri. It gave me a sense of serendipity and also a belief that true talent never goes unnoticed”, affirmed Shameer Tondon.

The music video features a boisterous bunch of kids, led by R.E.G.O.B who declares that a state of Bachcha Party is in effect and it’s their rules, likes and preferences that will be honored. Replete with some cool dance moves, funky lyrics and even a catchy rap portion by Bboy Aayush, the song is a bundle of dynamic energy that is perfectly wrapped in a set of infectious beats. R.E.G.O.B himself reflects swag and style and is quite a powerhouse performer in the video. The dance is choreographed by Rahul Shetty.

Overwhelmed by audiences’ response, R.E.G.O.B said, “I can’t express my happiness in words. Being a singer, nothing excites me more than the audiences’ love and support. Bachcha Party is all about us kids having fun and enjoying and doing things we love doing. I totally relate to the song, and with the guidance of my grandfather, my parents and Shameer Tandon sir, I managed to deliver this track. It was also awesome fun to shoot the song and do some cool dance moves.”

Bappi Lahiri is elated about R.E.G.O.B achieving grand heights of success at such a young age. He says, “I can’t contain my excitement seeing our fourth generation claiming a position in people’s heart. The first 1 million views have come so speedily, that one couldn’t have asked for more. I am really happy and proud that my grandson is starting off his career in music so early on. Bachcha Party is a song that suits his personality and style and is best suited for him thanks to Shameer Tandon who discovered the spark in R.E.G.O.B & has composed the song that suits him best. And for a record label as prestigious as Saregama to launch him makes it doubly special, since my association with Saregama goes back to many decades. R.E.G.O.B is diligent and an eager learner, and I am excited to see what opportunities lie in store for him. This is the fourth generation, given that  my daughter Rema first cut her album Little Star in 1987 & she debuted with a Platinum Disc now her son R.E.G.O.B is  again with Saregama for his debut, so history repeats itself.”

The song is out now on Saregama’s official YouTube channel and all leading music streaming platforms.