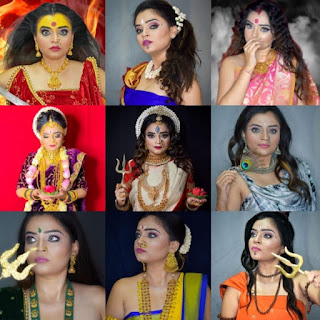 Shreya Kulkarni is a known Marathi actress who has achieved now a good place in film industry.

Recently Shreya was seen shooting for nine nauratri looks for which her followers were waiting and excited to see. Shreya maintains her Instagram account very beautifully. She hereby posted 1 look per day on nine days of nauratri and wished her followers. Shreya is always on the lips of crowd whether or not she remains active on her social platforms. Shreya’s nine looks of goddess’s went viral in this nauratri festival.

She has done 9 imaginary looks of Shailaputri, Brahmacharini, Chandraghanta, Kushmanda, Skandamata, Katyayani, Kaalaratri, Mahagauri, Durga or ParaShakti. By posting these pictures Shreya heartily explained how nauratri is important to her. Shreya being a maharastrian follows every rituals genuinely and loves to follow her culture. Shreya being asked which goddess do you love the most answers that she loves Mumba devi the most as the name “Mumbai” comes from the name of the goddess “Mumba” being located in Mumbai itself.

Shreya is so excited for her 9 looks and has posted every look on her Instagram feed.

Shreya was invited by Pratibha’s bridal studio and pretty strings to make these charming transformation. Shreya says it took 2 days to make 9 looks. Speaking about the makeup Shreya Kulkarni says it’s just 2 base we did in 2 days and changed the bindi, Jwellery and dressings afterwards according to the 9 colours of nauratri.