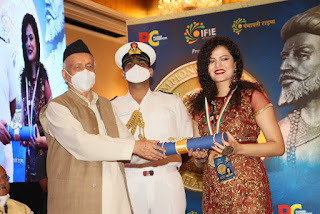 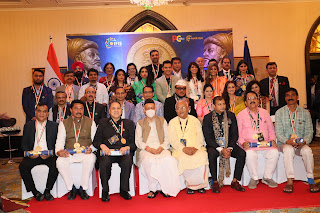 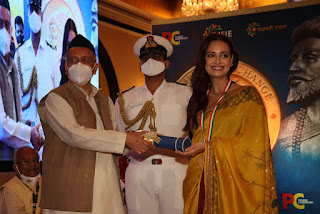 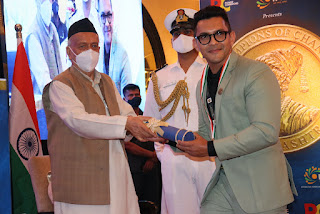 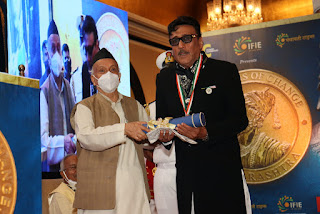 Chief Guest Bhagat Singh Koshiyari offered his greeting to the jury members of the award ceremony and all the dignitaries present during the function including Dr Ved Pratap Vaidik. He also thanked Mr Nandan Jha and his organization's- Power Corridors andPanchayati Times for organizing such a prestigious event. “Last time when I felicitated the awardees from across the country for the highly covetedChampions of Change National Awards held in Goa, it was a memorable experience to honor many other great personalities who brought about change like Goa ChiefMinister Pramod Sawant himself, Union Minister Shripad Naik and Sonu Nigam. Although all the work of change is commendable, whether it is done by a top political figure or by the emerging youth power, all the work done is a testament of the development in Maharashtra”, he said. Senior Journalist Dr Ved PratapVaidik heaped high praises on the Chief Guest BS Koshiyari for all his achievements and for his genuine regard for the award ceremony. He also congratulated Mr Nandan Jha for initiating such a platform for honouring the heroes of the society who have served the country in their respective fields.He said that there can’t be a better feeling than being recognized for all your efforts towards the society.

Nandan Jha, Founder and head of ‘Championsof Change Award’ thanked the Chief Guest Shri Bhagat Singh Koshiyari for gracing the event. Mr Jha also shared his experience of the previous ‘Champions of change award’ in Goa where also Sh Koshiyari was the chief guest of the event. Healso stressed the importance to honour and motivate the champions of society for the growth of the country. He also expressed his delight to be honouring such esteemed personalities of the state of Maharashtra. Justice Gyan Sudha Mishra senther message through a video and said she felt that it's a matter of great pride for her to be a part of this highly auspicious event called 'Champions of change, Maharashtra'. “It is a state recognition award which honours the individuals who imbibe the values of Chhatrapati Shivaji Maharaj who was actually the first medieval Indian ‘Champion of change’ from the soil of Maharashtra. I want to congratulate all the winners for their efforts and wish them all the very best for their future endeavours. Keep working and motivatingothers”, she added.Home Minister of Maharashtra Dilip Walse Patil said that he felt really proud to be awarded with the Champions of change award and thanked the jury for recognizing his social initiatives. “I am feeling proud to be honoured with this prestigious award and thank the jury who recognized the social initiatives taken by me. I am also thankful to the people of Maharashtra who have shown faith in me. ‘Champions of change’ is a great platform to honour the true champions of the society. I also want to thank Mr Jha and his team for honouring me with this award. This award is a source of inspiration to me. Ithink anyone with his great and determination can bring a positive change in the society”, he said.Social activist Nana Patolethanked BS Koshiyari and Dr Vaidik for conferring him with the award. He also said that he felt really privileged to be one of the champions of change of this year. Social reformer Sindhutai Sapkal, who was unwell and couldn’t attend the ceremony, sent a video message thanking the jury members and the chief guest for honouring her with the award and senther best wishes to the organization for its future endeavours.

‘Champions of Change,Maharashtra’ is a very prestigious Maharashtra state recognition award for promoting Chhatrapati Shivaji’s values of courage, community service and inclusive social development and it is yet another initiative of InteractiveForum on Indian Economy which annually organizes Champions of Change Award Internationally, Nationally and at State-Level in India.