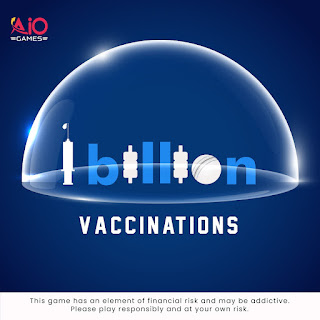 As India administered one billion vaccine doses, a landmark for the world's second-most populous country, it took a step further towards winning the war with the Covid-19 virus. The virus had haunted and deeply affected a very large part of the Indian population and achieving this indomitable task is considered a major achievement by the healthcare industry given the challenges associated with the lack of resources in the country.

Hence to celebrate this feat, the fantasy cricket app AIO Games made a creative congratulatory Instagram post based on the one billion doses that were administered to the nation by the healthcare workers. They applauded every medical professional who took immense care to fight the virus by risking their safety and commemorates the efforts of every individual who evolved in the process of developing the vaccine through their Instagram post.

Commenting upon the post the founder of the AIO Games Mr. Amin Rozani said, "This is a historical feat for our country. After what we have been put through for the past couple of months, this (1 billion vaccination) shows our nation is united in it's fight against the deadly disease. I am glad that AIO Games did a celebratory post on this."

The official Twitter profile of the World Health Organisation (WHO) South-East Asia also congratulated India for achieving the milestone.

AIO Games is a highly skill based multi-format game offering a wide range of iconic games, ranging from Poker to Fantasy Cricket. It is the ultimate destination for people to win real cash while playing games online with friends!