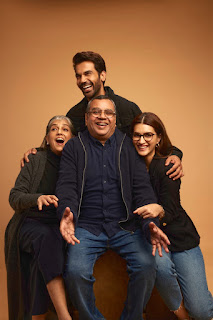 'Hum Do Hamare Do' has been generating quite a lot of buzz on social media, with fans raving about Paresh Rawal and Ratna Pathak Shah’s pairing. Many are also excited to see the legendary duo play “make believe” mom and dad to Rajkummar Rao on screen.

The Dinesh Vijan production tells the story of a man who adopts a “mummy” and “papa” to win over his “to be” wife, as Rajkummar brings Paresh and Ratna home to complete his family. While the story is unique and lovable, what makes it more special is how much it means to Mr. Rao to act alongside seasoned thespians.

Rajkummar, talking about his behind the scenes experience with Mr. Rawal, says, “Paresh sir is a lot of fun in real life just like he is on camera. There is a lot to learn from him, not only has he done some brilliant work, but he is also a very big cinephile, which is how we became good friends. I feel fortunate to call someone so senior in the industry as a friend”.

On the impeccable Ratna Pathak Shah, he adds, “I’ve admired Ratna ma’am since my early days, right from Sarabhai v/s Sarabhai. She is very passionate about acting and brings a lot of grace to her character; I sensed that many times when we were enacting scenes.”

Well, they do say that destiny conspires to get us what we wish for and looks like Rajkummar has one grand dream ticked off his bucket list.